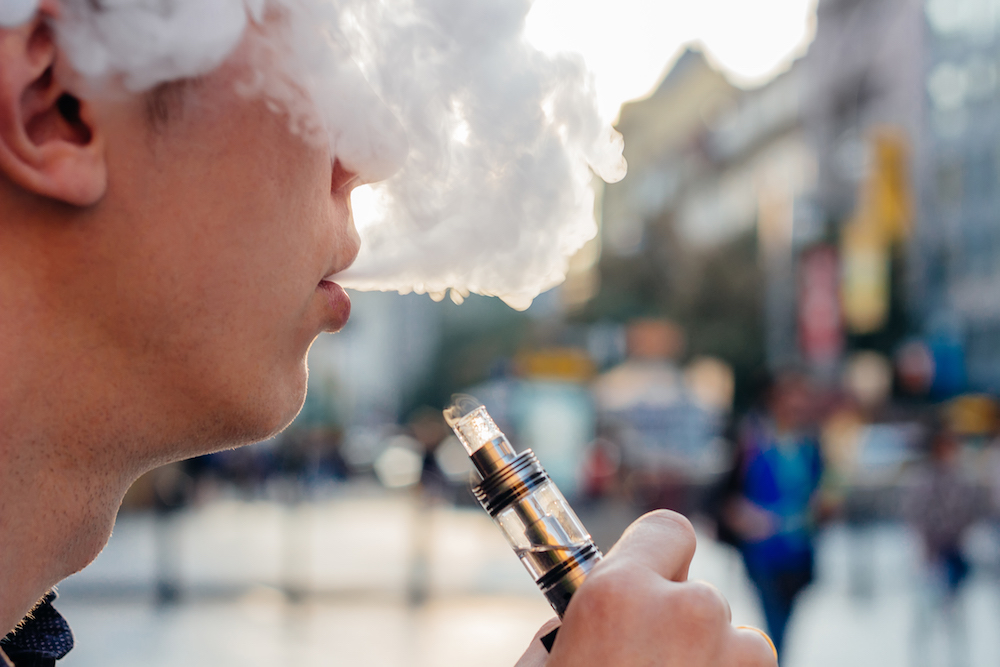 The rise in popularity of using vaporizers, or vaping, has created many questions, especially when it comes to oral health. There is lots of conflicting information about the overall safety of vaping. Yet, new studies suggest that it’s best to avoid vaporizers altogether, especially if you want to keep your mouth, teeth, and gums healthy.

Vaporizers, or vapor cigarettes, are tobacco-free devices that deliver nicotine and other chemicals, including flavoring, to users through an inhaled vapor. They look like battery-operated cylinders, often cigarette-shaped, with containers for holding vaping solution. These solutions are made up of nicotine, formaldehyde, and other chemicals used in various vapor flavorings. The vaporizer uses a heating mechanism to turn the solution into a vapor, which the user inhales much like a regular cigarette. However, unlike a regular cigarette, there is no tobacco and no smoke.

What are the Benefits and Hazards of Vaping?

The medical community currently agrees that vapor cigarettes are safer overall than regular cigarettes, and can in some cases be useful in helping adults stop smoking. Vaping can give smokers the nicotine delivery and mouthfeel of a cigarette while they work on kicking their tobacco habits. Also, second-hand vapor has been shown to be much less harmful than second-hand smoke.

However, on the flip side, opponents contend that vaping can actually increase the likelihood that teens will eventually move on to tobacco use. New rules announced by the FDA this summer require purchasers to be 18 years old, as with tobacco products.

Vaping and Your Health

While many physicians consider vaping to be safer than cigarette smoking, studies are beginning to show the negative health effects associated with it. Even without tobacco, nicotine presents its own health hazards – including heart and artery problems, brain development problems in young people, and damage to unborn babies when consumed by pregnant women. Diacetyl, a chemical used to add flavor to certain vapors like butterscotch, is associated with a type of lung disease.

A 2016 article in Science News cites studies that link chemicals used in vaping solutions to gene damage, affecting the body’s ability to fight infection. These chemicals have also been known to impact brain activity in animal studies.

Conclusive information about the side effects of vaping on oral health is still limited. Experts do believe, though, that avoiding vapor cigarettes, as well as e-cigarettes and regular cigarettes, is best for your oral health.

Vapors hit the mouth first – when they are at their most concentrated point. Researchers believe that this impact could lead to tissue damage down the road. In addition, the Oral Health Group states that mouth dryness and irritation are commonly caused by vaping.

Regarding long-lasting damage to the mouth and gums, several studies are being launched this year that will allow doctors to get a better handle on the impact of vaping on oral health. The National Institute of Dental and Craniofacial Research (NIDCR), which is part of the National Institutes of Health, recently funded research grants to study how vaping affects tissues and good bacteria, or the microbiome, in the mouth. However, the agency has already gained data that shows that e-cigarettes and vapor cigarettes present a potential oral cancer and periodontal disease risk to users due to their higher exposure to dangerous chemical mixtures.

Talk to Your Dentist About Vaping

At Hall Family Dentistry, we are committed to helping our patients achieve good oral health on every level. We’ve seen the damage that conventional cigarettes and tobacco use can cause. We encourage all of our patients to stop smoking and can recommend effective cessation programs.

While we still don’t know the overall impact of vaping on the teeth, gums, and mouth, we feel that there is enough evidence to suggest that vaping is dangerous to your health. If you have any questions, feel free to contact us today. We’d love to help you kick the nicotine and tobacco habit for better health in the new year.